Book for BOB (Black Out Bash) 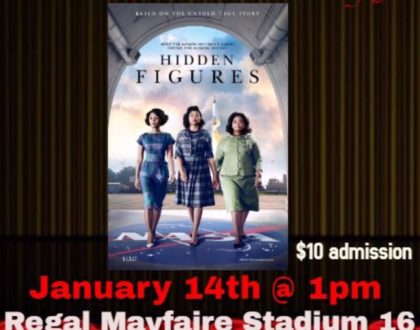 Mother/Daughter Movie Day Girls Rocking in the South and New Hanover County NAACP invite you to attend the private screening of Hidden Figures. We encourage young ladies to live to their potential in the areas of science, technology, engineering, and mathematics and this film shows how females can rise to the challenge and make history. About the film: As the United States raced against Russia to put a man in space, NASA found untapped talent in a group of African-American female mathematicians that served as the brains behind one of the greatest operations in U.S. history. Based on the unbelievably true life stories of three of these women, known as "human computers", we follow these women as they quickly rose the ranks of NASA alongside many of history's greatest minds specifically tasked with calculating the momentous launch of astronaut John Glenn into orbit, and guaranteeing his safe return. Dorothy Vaughn, Mary Jackson, and Katherine Johnson crossed all gender, race, and professional lines while their brilliance and desire to dream big, beyond anything ever accomplished before by the human race, firmly cemented them in U.S. history as true American heroes.

Book for She Rocks Teen Empowerment and Business Expo

Book for A Night Of Etiquette And Elegance Dinner Workshop

A Night Of Etiquette And Elegance Dinner Workshop

It's that time again for our annual etiquette training. It is necessary for etiquette skills to be taught to kids regularly so that they will be able to naturally utilize the learned skills in the appropriate settings. In this workshop, we allow non-members to join us in our learning experience simply because it's that great of an opportunity to not share the love! However, seating is very limited, so make sure you register today to secure your spot. Speakers to be announced   Click Here To Register